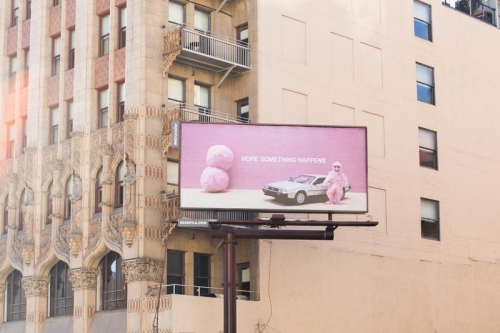 Since the beginning, WeTransfer and Ace committed to using the signage as a platform that celebrates our mutual interest in sharing. Each month, we call upon a different artist to bedeck the billboard and create an accompanying digital download, available to the masses at deardtla.com

This month, we welcome the work of Korea- and London-based artist, Wonwoo Lee. Lee's early sculpture work, gates of the world, yielded the phrase hope something happens — a simple but enigmatic token of anticipation. For the billboard, Lee re-contextualizes the phrase aside an image of a classic Delorean, playing with notions of temporality, optimism and nostalgia.

"We're in love with this image. It strikes the billboard with the same sense of courage and ambivalence that so many LA locals carry every day. Lee's message is sincere, and we're pretty excited that we get to work with WeTransfer to share that message with the world." — Kelly Sawdon, Partner/Chief Brand Officer, Atelier Ace

"It is a good opportunity to have a billboard as a temporary canvas which can deliver my greeting to the people in L.A. As we head towards the year's end, I was hoping that people greet next year with some bright thoughts and happy expectations." — Wonwoo Lee

“There is an element of the unexpected in Wonwoo’s work, and his contemporary style draws people in. You can’t help but stop to look and listen, and we want to be a catalyst in sharing his creativity with Los Angeles and the rest of the world.” — Fatma Genc, Brand Director, WeTransfer