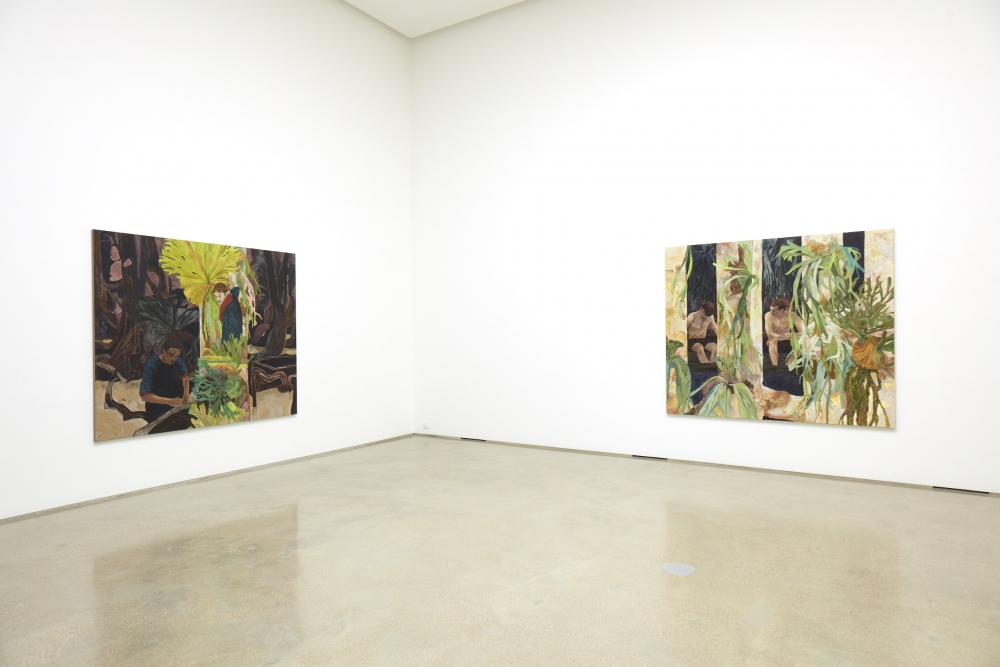 SEOUL, Oct. 27 (Yonhap) -- Two artists exhibit two very different expressive styles -- one is figurative and the other is abstract. Somehow, however, there exists quite a surprising similarity between American Hernan Bas and Korean Jeong Young-do when it comes to expressing suppressed desires in their works.

The unlikely duo, who have never exhibited their works side by side, are showing their latest paintings -- the "Bathers" series and "Plastic Freud," respectively -- in the joint exhibition "Wild n Out" at Seoul's PKM gallery.

"The two are similar in that both express their inner sensitivities, bottled-up desires and stifled feelings on canvas. The wildness is exposed in rich colors and intensity of expression," the gallery's director Park Kyung-mee said at a press briefing on Friday.
She didn't know what to expect from this unusual composition in the beginning, as the two artists have their own individual artistic styles and play by their own sensitivities.

But the synergy between the two, she added, turned out quite impressively.

Saying he first saw Bas's work online, Jeong, one of Korea's up-and-coming contemporary artists, said, "Many focus on the people and their facial expressions in Bas's paintings in order to understand the underlying narratives."

"But I was more intrigued to see how the people's feelings and their surrounding environments interact with each other," he said, adding that he could see abstract aspects in Bas's figurative paintings.

Deeply influenced by Austrian neurologist Sigmund Freud and his own neuropsychiatrist father, Jeong is known for planting numerous references in his paintings and encouraging the viewers to figure out the hidden messages he hopes to convey.